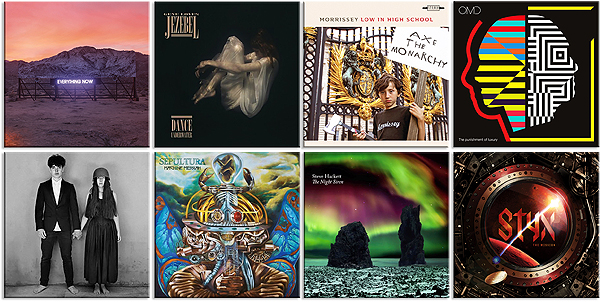 The year is nearing its end once again, giving way to yet another new beginning, new adventures. So, it is time to make a recap of new music released in 2017 that any music fan should check out and listen to, particularly those whose preferred genres include New Wave, Metal, Alternative Rock, and Progressive Rock.
file under New Wave / Alternative Rock

Those who have been accustomed to the typical fuzzy and cacophonic tendencies of Arcade Fire, especially when pertaining to the Canadian band’s earlier albums, will certainly find themselves pushed out of their comfort zones while listening to Everything Now. However, if you love stylistically progressive music, then the new album of the Montreal, Quebec-based band will immediately catch your fancy. Recommended tracks are the title track, “Infinite Content,” and “Electric Blue.”

There are bands whose disappearance from the limelight causes them to recharge and to reignite their old flame for words and melodies, enabling them to combine all these with their time-wrought experience and current musical state of mind, producing majestic results. The English band Gene Loves Jezebel, with its new album, Dance Underwater, is an epitome of this.

Formed in 1980, in London, England, Gene Loves Jezebel was in the forefront of the Gothic New Wave/Rock scene in the late ’80s, churning out hit single after hit single, which included “Heartache,” “Desire (Come and Get It),” “The Motion of Love,” and “Jealous.” Recommended tracks from the band’s new album are “Charmed Life (Never Give In),” “World Gone Crazy,” and “Chase the Sun.”]

Only two years fresh from the success of his well-crafted tenth album, Morrissey—the equally loved and loathed vocalist and lyricist of the long-defunct English band The Smiths—is all ready to axe again the Monarchy and other issues that disgust him. His new manifesto, Low in High School, is another impressive set of provocative proclamations draped in golden red and brilliant blue tin foils of catchy melodies and choruses as well as intricate arrangements and instrumentation. Recommended tracks from the quirky artist’s new album are “My Love, I’d Do Anything for You,” “I Bury the Living,” and “All the Young People Must Fall in Love.”

Orchestral Manoeuvres in the Dark – The Punishment of Luxury

Both fresh and familiar, O.M.D.’s new album, The Punishment of Luxury, showcases a perfect blend of the English band’s old, classic Synthpop sound and its contemporary Electronic Dance Music experimentation heard best in its latter works.

Properly known as Orchestral Manoeuvres in the Dark, the now highly influential band was formed in 1978, in Merseyside, England. O.M.D. catapulted to commercial popularity in the 1980s, via a slew of hit singles that included “Electricity,” “Enola Gay,” “Souvenir,” “Genetic Engineering,” “Talking Loud and Clear,” “Secret,” and the ubiquitous “If You Leave” from the soundtrack of the 1986 John Hughes film Pretty in Pink—effectively placing the band in the pantheon of New Wave Pop greats. Recommended tracks from the band’s new album are “The Punishment of Luxury,” “What Have We Done,” and “One More Time.”

U2 – Songs of Experience

What self-respecting Rock or even Pop music enthusiast would claim that she does not know U2—one of the most ubiquitous bands in the world?

Formed in 1976, in Dublin, Ireland, U2 never really stopped from making music and taking this to the road and onto the world’s biggest stadiums. Its thirteen critically acclaimed studio albums have produced chart-topping singles that included “I Will Follow,” “Gloria,” “Sunday Bloody Sunday,” “Pride (In the Name of Love),” “Where the Streets Have No Name,” “Angel of Harlem,” “”Even Better than the Real Thing,” “Stay (Faraway, So Close!),” “Staring at the Sun,” “Beautiful Day,” “Vertigo,” “I’ll Go Crazy if I Don’t Go Crazy Tonight,” and “Every Breaking Wave.” Now, the Irish quartet has just released their new offering, transforming once again innocence to experience—not only for themselves but also for the world at large. Recommended tracks are “You’re the Best Thing about Me,” “Get Out of Your Own Way,” and “The Little Things that Give You Away.”

The new album of Sepultura is an amalgam of various sounds that include Glam Metal, Gothic Rock, Grunge, Hardcore, and Latin World music. The Brazilian Metal band is, indeed, staying true to its musical vision— cultural fusion and sonic diversity.

Formed in 1984, in Minas Gerais, Brazil, Sepultura has become one of the most prized, culturally grounded bands in the Metal world. Recommended tracks from the new album are “Alethea,” “Iceberg Dances,” and “Cyber God.”

Another smorgasbord of different musical instruments from various parts of the world and diverse sonic styles that will surely satisfy enthusiasts of classic Progressive Rock, Glam/Power Metal, Psychedelic Folk, and World music, The Night Siren is an additional testament to the iconic English songwriter-musician Steve Hackett’s prolific discography and multiculturally oriented songwriting and guitar wizardry.

Hackett was the guitarist of the English band Genesis during its so-called ’70s Progressive Rock phase, when its music was defined more by its complexity than by the eventual Phil Collins–led Pop popularity. His post-Genesis masterpiece remains to be his debut solo offering, 1975’s Voyage of the Acolyte. Recommended tracks from the new album are “Behind the Smoke,” “Fifty Miles from the North Pole,” and “Anything but Love.”

Many of its fellow veterans tend to choose the presumed safe musical direction upon reaching the so-called twilight of their respective careers by releasing commercially oriented albums. Not Styx, whose new release, The Mission, is both a homage to and a reassertion of the American band’s Progressive Rock roots.

Formed in 1972, in Chicago, Illinois, United States, Styx has sixteen studio albums under its credit, spawning a slew of now-classic ballads that include “Lady,” “Come Sail Away,” “Babe,” and “The Best of Times.” Recommended tracks from the new album are “Gone Gone Gone,” “The Greater God,” and “Red Storm.”

These are just some of the exciting new albums that were released in the nearly ending year. Check them all out and treat yourself to new music. To some degrees, it’s good to be stuck in the music of the past; after all, it gives us a sense of nostalgia, unlocking otherwise forgotten memories of our yesteryears. However, how can we make new soundtracks for our new memories if we don’t stay in touch with whatever is available in the present? Be nostalgic once in a while, but ensure that you also stay updated; lest you will be left behind!

The One who Got Away

Is the government losing the war on drugs?