When Julie Holland Javier was proclaimed OFSAM’s Queen of Hearts 2016, the Viscount Gort Banquet Hotel and Conference Centre became a venue of an enchanted evening.

Most of the lady officers and members of the Original Filipino Seniors Association of Manitoba (OFSAM ) came in red, shade of red gowns, and men in their barongs and coats; guests from various organizations, politicians from Ottawa, Manitoba leg, and city hall, actively and eagerly participated in the ceremony, savoured the good food and danced the music. Even Arnold Tungol, a ballader and one of the best singers in the province, serenaded Queen Julie with two lovely songs.

The entrance of the Queen of Heart became the focal point of attention, as Queen Julie Javier stood side by side with her escort, MP Robert Falcon Ouellette, MP of Winnipeg Centre and followed by the previous Queen valentines.

Special opening dance by OFSAM Queen of Hearts Julie Holland Javier with her escort MP Robert Falcon Ouellette; followed by a special number of the husband and wife dancing duo, Rene and Thelma Macaro. Exchanging partners for the Queen of Hearts include Jon Gerald, Jay Javier, her son; Kevin, Tony, and other guests.

Public dancing followed and everyone was happy, all smilesl and Queen of Hearts Julie Holland Javier, together with her family, extended many thanks to all who attended and participated in the celebration of the hearts. Especially to the officers and members of OFSAM led by Letty Duque Antonio, president. “One of the happiest party I’d ever attended!”, most of the comments from the guests. 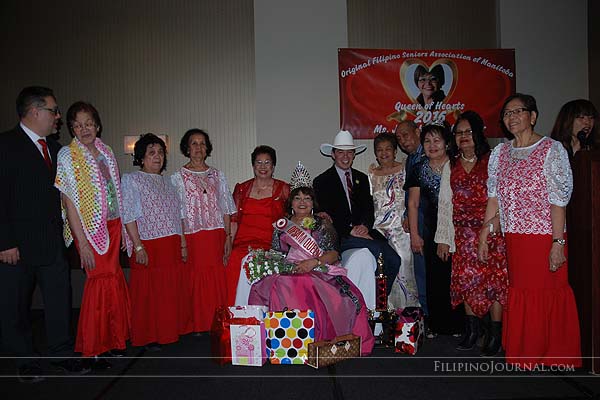