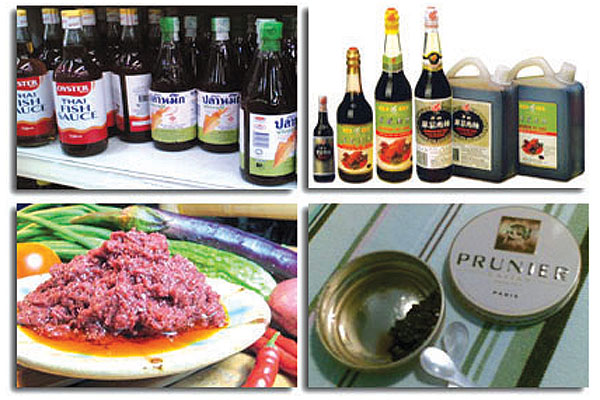 [On the Universality of Seasonings and Condiments]

Seasonings and condiments are an aspect of Filipino cuisine that many Filipinos feel embarrassed about, perhaps because of the appearance, color, and smell of many of these food enhancers or modifiers; and maybe because they think that these are found only in the cuisines and dining tables of Filipino households.

Well, if they think that patis (‘fish sauce’) and bagoong (‘shrimp paste’ ), for example, are unique to the Filipino culture, then it’s about time that they open their minds (and their taste buds and olfactory sense, for that matter) to cuisines of other cultures. Only then will they know that such seasonings and condiments have been existing also in the cuisine and cooking of many other cultures for a very long time.

Not Only in the Philippines
Fish sauce or extract is a condiment derived from fish or shellfish that have been allowed to ferment. An essential ingredient in many curries and sauces that comes in varieties, it is a staple ingredient in Filipino cuisine (patis), Vietnamese (nu?c m?m), Thai (nam pla), Burmese (ngan bya yay), Indonesian (trasi), Cambodian (prahok), Korean (jeotgal), Japanese (ishiru), and many other Asian countries and even Western countries (Worcestershire sauce), which contains anchovies.

Soy sauce (toyo) is a condiment made of soybeans fermented along with water and salt. Some varieties are made with roasted grain. It is a traditional ingredient in East and Southeast Asian cuisines and, in more recent times, is used in Western cuisine and prepared foods.

Bagoong (shrimp paste or fish extract). While bagoong as many Filipinos know it may have originated in the Philippines, a similar condiment known as garum (composed mainly of fish intestines) existed in Ancient Rome.

Caviar—an expensive delicacy/appetizer popular in Canada, United States, and Europe—is made of salted fish roe, thus may be considered related to bagoong and other fish extracts.